I went for my horse-riding lesson and was introduced to my steed; Arthur.

A magnificent black horse, I was looking forward to jumping over hedges and shouting.

Arthur had other ideas. He took one look at me and went bonkers. He reared up on his rear legs and looked as though he wanted a boxing match. The delightful Penelope (she’s so brave & magnificent) manhandled me out of his way to prevent him killing me.

The lesson was abandoned as half a dozen horse ladies were fully occupied getting the mad bastard calmed down and back in his horse house.

To make matters worse, when I got home, I told Bonnie the above. She went mental (a bit like Arthur): “You’re not going horse riding. You’ll get killed”.

It seems to me, every time I embark on something new it’s: “You’ll get killed”.

I promised her I wouldn’t go horse riding again.

I’m a lying cunt. I am now figuring out an over-elaborate plan to account for missing bits of time so I can go horse riding and not get killed. 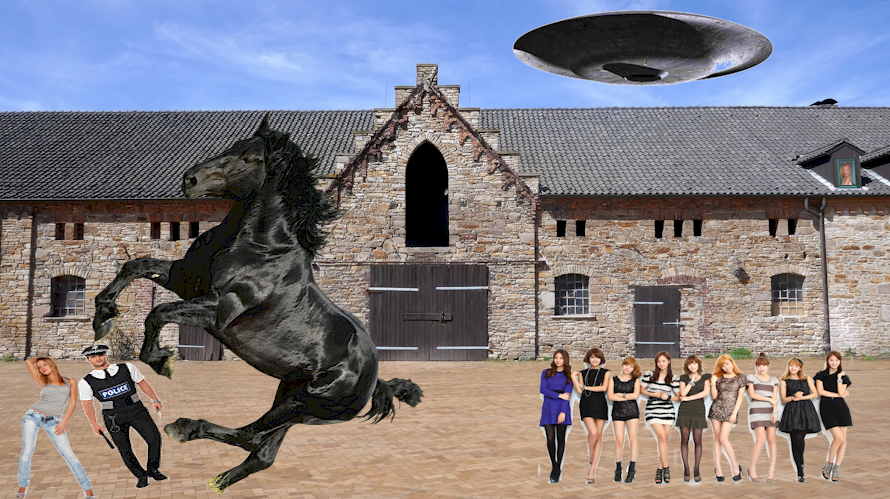 The horrifying events unfold. Me, for some reason dressed as a policeman and, inexplicably, having piled on some pounds and grown a beard and had a haircut, stands defenceless as Arthur (the massive horse) tries to kill me with death.

Penelope, left, rescues me by dealing with the wild crazy lunatic beast.

The other horse ladies (I told you they were all gorgeous) take Arthur back to his horse house where he can’t harm the terribly beautiful and adorable me.

During all the excitement, none of us realised a UFO was above in the sky so blue.

Do not use my vouchers

Did Someone say “Nobel Prize”?

I come face to face with DEATH

Peace in our Time

Vault
These videos had nowhere to live: They live here now
31 videos